A year ago I got out of nowhere following eMail: 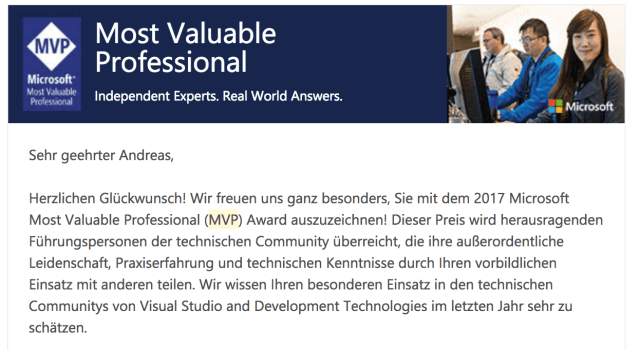 I was awarded as a Microsoft MVP in the “Visual Studio and Development Technologies” Category. How cool is that? And how did this happen?

I had filled out a profile and entered my activities on https://mvp.microsoft.com/, but the feedback that I got months before the eMail, was that a little bit is missing and it needed a some more activities to become a MVP. But as it looks now, it was still enough. 😉

So what did I do now in the last year as a MVP?

First I continued my work on SpecFlow (http://www.specflow.org; https://www.github.com/techtalk/SpecFlow) not only in my dayjob, but also in my spare time.

Motivated through the award, I wanted to give more talks and bring the .NET community in Vienna more together. Together with my colleague Raoul Holzer, we did together following talks and events in the last 12 months:

And we have already planned some for the future:

I have to thank my company TechTalk for supporting the meetups with a location, drinks and food.

You get some really nice benefits when you are being a MVP and I really enjoy them. Some of them are from Microsoft, some are from other companies. So you get an Office 365 subscription and a Visual Studio Subscription. From JetBrains you get a Resharper and Rider license. That makes developing really easy.

At the end of May/begin of June there was the MVP Community Connect in Madrid, which was really fun. There I had the change to meet some other MVPs from Austria, Spain, Portugal and Italy.

But the coolest benefit of being a MVP is the MVP Global Summit in Redmond where all MVPs of the world get together for some days and are able to get in touch with the product groups at Microsoft. As this will be my first Summit, I am really excited to attend it.

So if you are doing community work in the Microsoft technology stack or working on Open Source projects that has anything to do with Microsoft, go and nominate yourself for the MVP.

Hope to see you then at the next MVP Global Summit!